Finally, after almost a year, I have gotten around to uploading some of my photos to a web album and finding an online photo editing program.  I am really excited about it…then again, I get really excited over finding a penny in a parking lot.  Nevertheless, what this means for you, dear readers, is more photos!  I find it a little narcissistic on my part to assume that I can captivate you with only my written words and no photos.  BO-RING.  So here we go!

If you have read my old posts, you’ll remember Wayward Jones, the chicken who was infamous for running circles and otherwise getting herself in all sorts of hijinks.  She also, unfortunately, met her end when a neighborhood dog carried her off.

A few months ago, I got an email about someone wanting to relocate a couple of roosters.  One was a breed called a Showgirl.  Showgirl chickens are a cross between a Silkie and a Naked Neck breed.  The result, after several generations of re-crossing with Silkies, is a bird that looks primarily like a Silkie, but with a naked neck.  Thus, here is the result.  I am happy to introduce Ernie The Wonder Chicken, our new farm mascot: 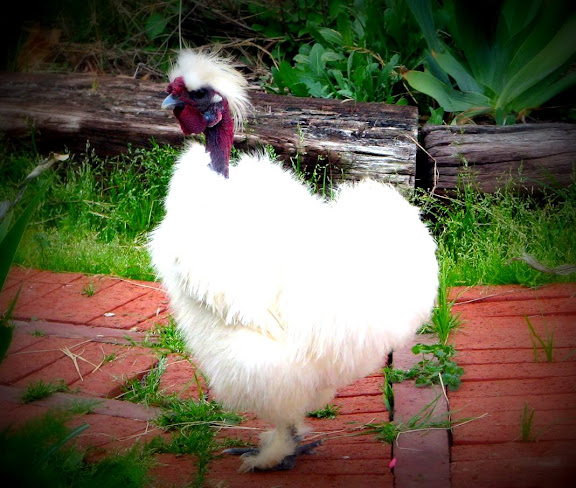 As with Wayward, I knew from the beginning that Ernie was going to be different.  I’m not sure exactly what it was (besides the fact he looks like a turkey mated with a cotton ball), but something immediately struck me about his personality.  One day I decided to give ol’ Ernie a bath.  Yes, really.  His feathers were stained a little from some red clay at the former owner’s house.  No, he wasn’t sculpting, by the way…we just happen to have some seriously red dirt around here.  Anyway, I took Ernie to the tub and scrubbed him down with baby shampoo.  He seemed to be, well, enjoying it.  Either that, or he was in some serious shock.  The fact is, he didn’t move through the entire process.  Then came the blow dryer (well, I couldn’t very well leave him wet, could I?).  To those people who believe that chickens have no personalities, all I can tell you is that you just haven’t met the right ones yet.  Ernie is the first metrosexual rooster I’ve ever seen.  He clucked and strutted and fluffed himself through the entire drying process like a teenage girl primping for a date.  It became immediately apparent that this was going to be a funny bird.

Now that we’ve had him a while, Ernie’s personality has really come out.  He is not afraid of people, and though he doesn’t always want to be caught, when he is, he will just lay in your arms and crow, if he’s in the mood.  He doesn’t struggle, which is pretty unusual for most roosters.  He has also rode with us to town a few times, even going through the drive through at Chicken Express (and living to tell the tale).   Just recently, he has adopted a baby hen as his own.  Not as his mate, but more as his own chick, which is odd.  He will actually catch bugs for her and lay them at her feet, as a mother hen would.  They sleep together, eat together, and are rarely a few feet apart.  I was so impressed with Ernie’s attitude that I bought 17 baby Silkies, just so that he could have some ‘ladyfriends’…and hopefully make more little Ernies.

Now, on to another new member of the farm.  We were at the local Atwood’s several weeks back, when a baby chick caught my eye.  It was just like Ernie, only in miniature.  Please meet “Poindexter”: 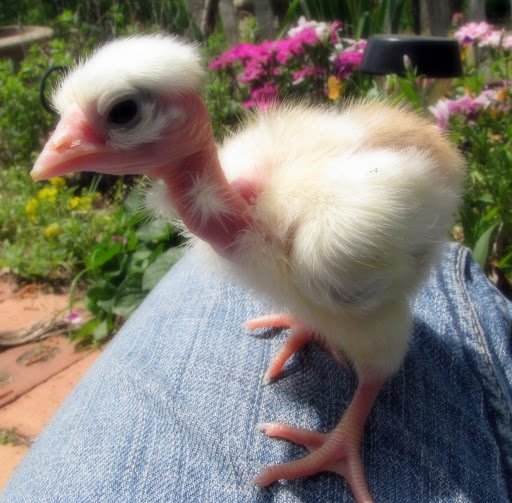 Poindexter is a Transylvanian Naked Neck, also known as a Turken.  It was once believed that they were a cross between a turkey and a chicken.  (not true)  Here’s an interesting article on the ‘why’ and ‘how’ of naked necks.  Poindexter exhibited extreme friendliness even from the beginning, when most chicks run away from you.  Now that I know more about the Naked Necks, I am seriously thinking about eventually switching my flock to them. They do better in hot weather (and good in cold, even), they lay about 180 brown eggs a year and are great foragers.  I noticed that as he (or she) grew older, Dexter could snap a gnat out of the air with ease.  Here is another glimpse: 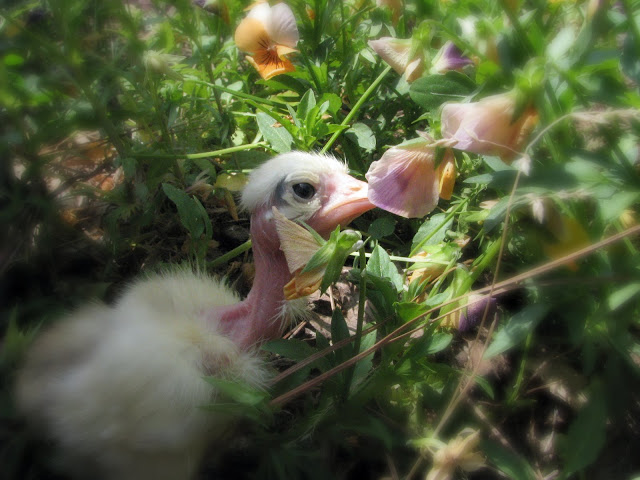 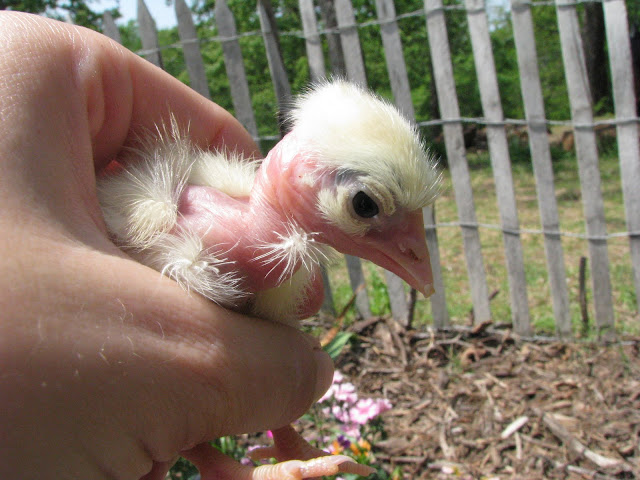